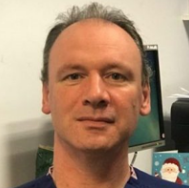 Mr Finlay Curran is a Colorectal and General Surgeon.

Mr Finlay Curran graduated from the University of Glasgow in 1989 and was awarded a Fellowship of Royal College of Physicians and Surgeons of Glasgow in 1993. Mr Curran subsequently undertook his postgraduate training in Glasgow, Merseyside and Manchester.

Mr Curran was appointed as a Consultant General and Colorectal Surgeon at Stepping Hill Hospital in 2001 and he was also Clinical Director for 6 years. In 2010, Mr Curran accepted a position at Manchester Royal Infirmary which is a tertiary referral centre. He performs both laparoscopic and open surgery and has special interest in general, hernia and colorectal surgery. Since his appointment at Manchester Royal Infirmary, he has developed a specialist interest in pelvic floor conditions and leads the colorectal pelvic floor surgery service. He is a member of the Association of Coloproctology of Great Britain and Ireland and also the Pelvic Floor Society. For pelvic floor conditions, he works closely with his gynaecology colleagues to ensure an holistic approach to managing complex conditions such as rectal endometriosis and pelvic mesh complications

During his training at the Royal College of Physicians and Surgeons, Mr Curran was awarded a travelling fellowship to study minimal access surgery in Germany. He was also a Royal College tutor and involved in Postgraduate Medical Education. He is active in clinical research and clinical trials.

What our patients say

Excellent, informative and friendly experience from initial consultation to post operation follow up appointment. Would highly recommend Mr Curran for his professionalism and welcoming manner.

Mr Curran is simply the best. Not only is he a wonderful surgeon he is also caring & compassionate. Throughout my treatment he was always positive & reassuring. I can never thank him enough.